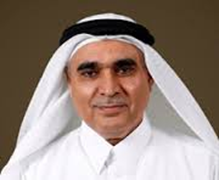 Dr. Elmagarmid is the Executive Director of Qatar Computing Research Institute (QCRI), a national research institute established by Qatar Foundation for Education, Science and Community Development (QF). Since his appointment in 2010, he has driven the Institute’s vision to bring positive impact to Qatar, its communities and people by focusing on large-scale computing challenges that address national priorities for growth and development.

By serving as an executive of QF, Dr. Elmagarmid is regularly called upon to advise the highest levels of leadership at QF on all matters related to investments in technology and infrastructure to establish world-class facilities and meet national objectives for innovation and development.

Dr. Elmagarmid serves on the executive committees and boards of several companies in Qatar and plays a key role in setting policies related to many key national initiatives such areas as cyber security, large scale genome sequencing, 21st century healthcare systems and preserving Arab culture and heritage. He provides significant input on incubation and acceleration in Qatar by serving on these boards. Of his many contributions to advancing innovation to building a knowledge-based economy in Qatar, Dr. Elmagarmid was responsible for developing a unified, integrated national electronic health record system for Qatar, which is used today by all major healthcare providers in the country. Also related to Qatar’s healthcare domain, he oversees governance and policy issues related to data including quality control, privacy and security. As a member of the national cyber security working committee, Dr. Elmagarmid developed the research strategy and implementation plans for cyber security, identified as a national grand challenge.

Before joining Qatar Foundation, Dr. Elmagarmid held a number of prestigious posts in academia and industry. He has held faculty positions at Pennsylvania State University, the University of Padova, and Purdue University, where he was actively involved in teaching and research for more than 25 years.

Dr. Elmagarmid served as a chief scientist in HP’s Office of Strategy and Technology and has worked with or consulted for Telcordia Technology, Bellcore, IBM, CSC, Harris, D.H. Brown and Associates, MCC, Bell Northern Research, Molecular Design Labs, SOGEI (Italy) and UniSql. Dr. Elmagarmid serves as the Chair of the IT Executive Committee of Sidra Medical and Research Centre and is on the board of directors of MEEZA.

Early in his career he received the NSF’s Presidential Young Investigator award from President Ronald Reagan. He is an IEEE Fellow (Institute of Electrical and Electronics Engineers), an ACM Fellow (Association for Computing Machinery), and an AAAS Fellow (American Association for the Advancement of Science). In addition, the University of Dayton and The Ohio State University have both named him among their distinguished alumni. Dr. Elmagarmid has also chaired and served on several program committees and editorial boards.

Dr. Elmagarmid is an accomplished and well-published scientist, authoring six books and more than 180 papers, and has run several well-funded research programs.